A Crown of Promise story 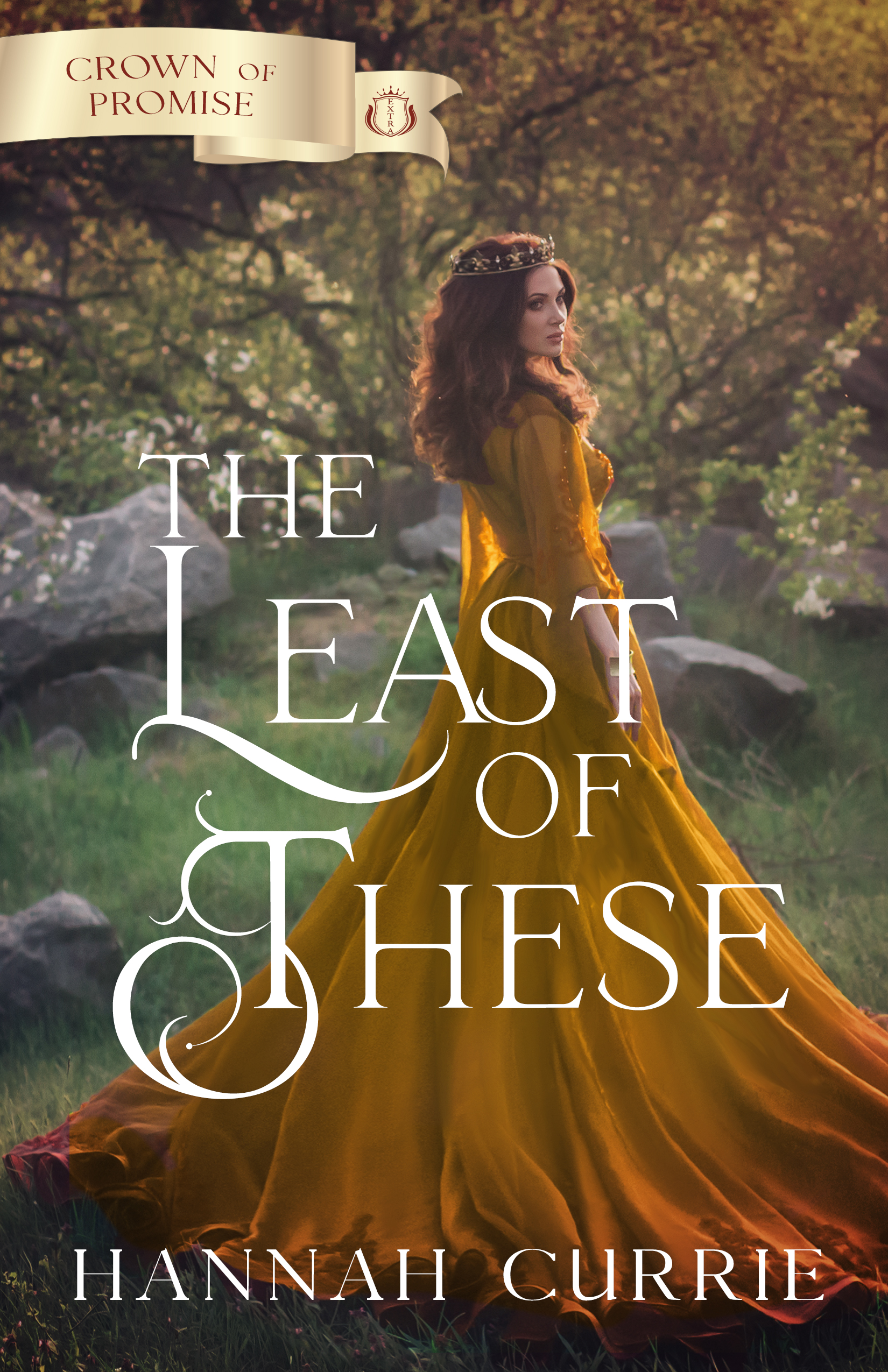 The Least of These

a foundational story in the Crown of Promise Series

Caralynne made a sixth careful stitch on Adam’s foot and told her heart to ignore her friend’s words. She held a five-year-old boy’s future in her hands, along with his dream of being a knight one day. Now was not the time to be thinking of anything but getting the wound stitched, bandaged and on its way to healing. She definitely didn’t have time to be thinking about the man she’d been trying her best to forget.

Two more stitches should do it. Caralynne wiped the back of her hand across her forehead and made herself continue. The boy was fortunate he hadn’t lopped his toes right off when he dropped the sword on them. Whichever guard had left his weapon within Adam’s reach was going to regret it by the time she was through reprimanding him.

She tied off the last stitch, finally taking her hands off the foot. Would the stitches hold? Had she done enough? Almighty, let it be so.

“Should I let him in?” Emma asked, peering out through a crack in the door.

“Who?” The bandage. She’d asked Emma to fetch it. Where had she— Oh. In the bowl. With the poultice.

Caralynne wiped Adam’s wound one more time before applying the poultice and winding the bandage around it. Wisps of hair tickled her forehead as a welcome breeze danced through the open window. A man’s groan followed the breeze. King Lior’s? She hadn’t even thought to ask if he’d come for her healing skills.

Emma frowned, seeming confused by the question. “No.”

Adam wasn’t the only person who’d come to her for help today, just the most urgent. Surely even a king could understand the demands on a healer’s time.

And she’d already told him goodbye. It had been the right thing to do. For both of them. Even if nothing before had ever felt so wrong.

Caralynne was washing her hands three hours later when she heard someone clear their throat. She looked up, and wished she hadn’t. Her heart fell like a boulder to the bottom of her stomach. Or had it jumped into her throat? Surely as a healer, she should have been able to tell. Either way, she had to swallow twice before managing to speak to the man who stood in her doorway.

King Lior simply shrugged. “You told me to wait.”

“I didn’t think you’d do it,” she grumbled. She’d certainly hoped he wouldn’t.

He asked quietly, humbly even, as if she had the option of refusing. One didn’t refuse a king—not if they wanted to keep their head. And yet, Caralynne hesitated. They’d been here before. Three weeks ago. Him standing in her cottage, her standing—she felt heat creep across her cheeks—far closer to him than she needed to as she wiped dirt from a deep scratch on his cheek. She hadn’t known then that he was the king, only that the kindness in his eyes had moved something in her heart, and left her wanting more. The way he’d looked at her, she was all but certain he felt the same.

The moment had been broken almost before it could begin when one of his guards came out of the forest holding the reins of his horse. The guard had teased the king about being too distracted by his upcoming nuptials to pay attention to low branches on their ride. Caralynne had been too busy calling herself every kind of fool join in their merriment.

The king. She’d almost kissed the king. Who was engaged to another woman. How had she not known it was him? Admittedly, she’d been sheltered most of her life, too busy learning and then practicing the healing arts to attend the castle’s feasts or dances—and he had been dressed as a guard rather than a king—but regardless, she should have known.

“Please, Caralynne? I need to speak with you.”

“You’re engaged. There is nothing left to say.”

He’d come back, the next day. And the next. Both times, he’d said it was so she could check on his wound, but waited all day for her to do so, ordering her to see to the needs of every other person before himself. He’d helped while he waited too—handing her bandages, fetching water from the spring, holding one anxious young child and telling stories to another while Caralynne mixed up a tonic for their ailing mother. It was only after he’d left the second day that she realized he’d also fixed the shelf in her storeroom that had been sagging. They were little things, really, and yet meant far more to her than they should have.

The third morning he’d come, an offering of still-warm bread in his arms, she’d stood here in this exact spot and asked him to leave.

You are an exceptional king, and an even greater man. It’s an honor to have met you, and to have shared these past two days with you. But please, King Lior, don’t come again. My heart can’t take your kindness when it can be no more than that.

He’d held her gaze for an endless moment before passing her the bread and walking away. It had taken all her strength not call him back.

“Please. Leave,” she said again. Three weeks’ distance hadn’t dimmed her attraction to him. If anything, the yearning for the impossible had made it worse.

She shook her head, determined to be strong. “No, I—”

“I called off the wedding.”

Lior stepped inside and reached for her hand, cradling it between both of his. “How could I marry her when you are the woman who holds my heart?”

Caralynne stared at him. “You—what?”

“Aye.” His smile was almost teasing. “’Tis as you heard. You are the one I love. The one I wish to be my bride.”

Bride. Love. Marriage. Had he really called off the wedding? He and his betrothed had been promised to each other since they were children. They’d been friends just as long. The entire kingdom had been anticipating the upcoming nuptials. Including Caralynne. At least, until she’d met Lior. And then she’d been anticipating them for a different reason—because then any chance of a relationship with the king would be well and truly gone, and she could once again move on with her life. Had he really called it all off? For her?

And the most romantic thing anyone had ever done for her.

And utterly ludicrous. They barely knew each other.

She pulled her hand out of his. “Three weeks isn’t long enough to fall in love.”

“It took me less than three days.”

She’d almost kissed him after three minutes. He was right. Whether or not it could truly be called love, there had been something between them from that first interrupted moment, which had only grown as they spent the next two days together.

“Why me?” Caralynne asked quietly.

She wasn’t looking for compliments, simply trying to understand. Falling for Lior was easy. He was kind, patient, caring, well-earning of the respect he held. Handsome too, with that thick swathe of dark hair and a gaze that welcomed one in and invited them to stay. And he was the king. Though she’d never dreamed of riches, it was impossible to ignore the attraction of a man who was both powerful and kind.

“Because you loved me first.”

“What? But I didn’t—I never—” She’d pulled back the instant she found out who he was, and done everything she could to banish him from her mind and heart since, careful to treat and act around him as she would every other person who came to her for help. Even Emma hadn’t noticed her attraction, and Emma was her best friend. How then had Lior?

“When Anna was hungry, you fed her. When Adam wounded his foot this morning, you stitched and bandaged it. You offered Roland a cup of water, and Brielle a place to sleep. You gave that bread I brought you to Widow Harrington and her son.”

“I couldn’t look away.” He brushed aside the piece of Caralynne’s hair constantly falling over her forehead, his thumb grazing her cheekbone before dropping back to his side. “You gave your cloak to that maid last week to wrap her newborn babe, something I intend to replace for you, by the way.”

Caralynne swallowed, almost choking as his words registered. “The babe?”

“The cloak.” He winked. “Although I’m more than happy to begin working on a babe as soon as we’re married too.”

Her cheeks colored, again, making him laugh. Curse how easily she blushed. “I didn’t do that for you.”

“Caralynne, I’m the king. They’re my people. What you did for them, you did for me. You are constantly giving. Even from the little you have. It’s what makes you so beautiful.” He brushed his thumb across her cheek again, as if he couldn’t get enough of the feel of her skin. “You’ve captured my heart, my love. From the moment I met you, I couldn’t imagine ruling alongside anyone else for the rest of my life. I know it’s only been a few weeks, but I’ve never been more certain of anything or anyone. Please, say you’ll marry me.”

“Yes.” The word was a whisper, as if her voice couldn’t believe his love any more than Caralynne’s mind could. It was impossible, that he would love her. And yet, she couldn’t deny this thing between them. Deeper. Wider. Greater than she could have ever thought to imagine. As if the Almighty himself had pulled them together and, despite time and all logic, held them there. “It would be my honor.”